On the support crew side of Coast to Coast

By adminFebruary 15, 2019Events, News
No Comments 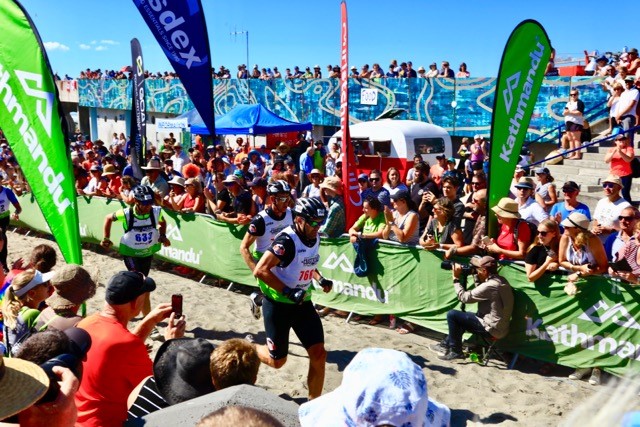 The finish line at the 2019 Kathmandu Coast to Coast was abuzz with elation, exhaustion, tears and cheers from friends, families and the competitors as they crossed under the banner.

I was on the other side of the tape this year among the hundreds of supporters lining the sides of the chute, watching our team Best Foot Forward NZ – made up of two of my Godzone team mates Richie McCaw and Rob Nichol – run through the final 100m of sand to be handed their well-earned finishers’ medals. 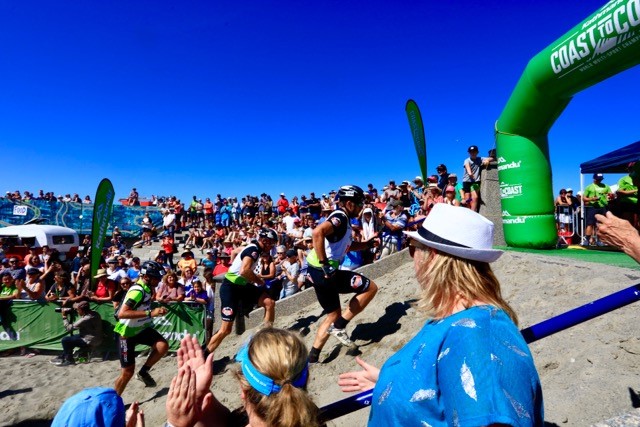 There was a vibrant atmosphere and plenty of support for all athletes crossing the finish line of the Coast to Coast. As one of the support crew members for the Best Foot Forward NZ team it was rewarding to see the boys run up the finish chute after battling sickness and cramp over the two-day race.

They were competing in the tandem event where they race the entire course together. I wasn’t looking after their transitions alone, as this was a real family affair with Rob’s wife Sally also racing in the mountain run (2nd in category); his mum, Granny Jane was camp mother and manager of food/ logistics; Richie’s dad Don was chief support crew and Mercedes chauffeur, while my partner Cat doubled her duties as support crew back-up and her public relations role with Subaru NZ.

This year the race had the atmosphere that it exuded in its former glory days with a capacity entry list and many race options to choose from. A recent shoulder injury meant I couldn’t kayak with one of the Coast to Coast Rangers team members but was still able to soak up all that the two-day race had to offer in my support crew role.

It started on the Thursday afternoon with the registration and briefing, which had an aura of nerves, pent-up energy and aspirations of what would unfold over the up-coming couple of days.

The next morning the inky darkness slowly flooded with colour to bring on perfect race conditions, so event director Glen Currie and his amazing team could relax knowing there would be no course changes and the disappointment for competitors that comes with them. Slow-moving traffic lighting up athletes’ ankle bands and the flickering of headlamps died away as the athletes reach the beach, taking in their last breaths of Tasman sea air for the day – until the same smell greets them from the Pacific side on Saturday sometime. Then the gun goes off and all those hours of training and dedication come to fruition in the next 10 – 20 hours of exercise.

So instead of hurtling in on my road bike after the 55km ride, I was waiting at the Aitkens Corner bull ring with transition gear in hand, anticipating when our team would arrive. One crew didn’t anticipate as well and their amazing athlete waited while his support team ate breakfast in the carpark, thinking that he wouldn’t be in for a while – a decision they may never live down!

I really enjoyed the time waiting – making the most of catching up with friends and strangers with the same role. In doing this, I learned so much about others and why they are doing this iconic race and what goal they wanted to achieve. 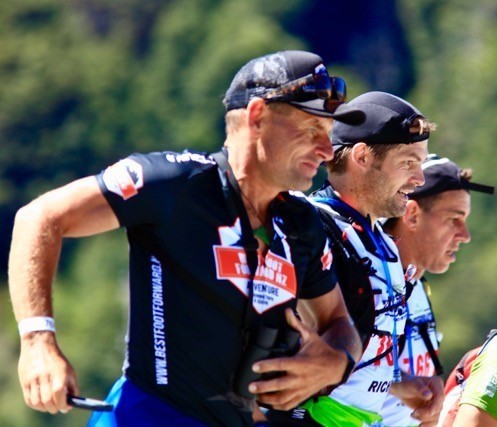 I would have loved to be doing Coast to Coast in a team but a shoulder injury meant I got to experience the race from the support crew side of the fence.

Coast to Coast is not only a bucket list event for many but also brings out the best in people as they strive to achieve something that is beyond what would normally be called achievable. Disabled athletes; people who have had near-death experiences; family teams and those that are after winning times, will all push their physical and mental abilities as they make their way across the Southern Alps to the New Brighton beach on the other side of New Zealand.

Crossing the Southern Alps takes you through some spectacular landscapes and we sometimes forget that before it was a race it was a top adventure trip for outdoors people.

Behind every athlete there is a story in the form of support from family and friends that have helped with time, training, and at times providing some mental crutches. I feel this is what gives the Coast to Coast race the culture and following it has had from the beginning.

Support crews start each day about 4.30am – cooking, preparing equipment for the day and making sure their athlete is as ready as they can be for what lies ahead. Once out on the course there is a lot of waiting… hoping they will be required at transition much earlier than anticipated, which often isn’t the case but there is always someone to share your story with.

This year it was easy with the hot weather playing a big role in the transition enjoyment. Kids swam in the rivers while other people just got a tan, or shared a picnic with friends and family. At the Waimakariri gorge bridge I think every competitor had a smile on their faces, after an amazing day on a river that was clear, blue and warm. A tail wind helped mitigate the time deficit that a low river may have added.

At the pointy end of the field in the longest day it was always going to be a close race without the likes of Braden Currie or Sam Clark to take it away in the run. Made up of many of the same faces as the past few years, with the addition of professional athlete Dougal Allan the top three was always going to be tightly-contested. As most race followers expected, Dougal would show his strength on the bike and ride away for the win over Sam Manson and Alex Hunt. In the female’s race Simone Maier would take the win over Elina Ussher in the same fashion, while Fiona Dowling held on for a close third. I always admire these top athletes for the time and dedication it takes to compete at this level, and know it is no easier for them than it is anyone else. It just takes them less time to earn a splash in the Pacific Ocean at the end!

Each year since Steve Gurney started racing as a professional, the longest day has been won by professional athletes, which is fantastic but with very little prize money in the sport most turn to triathlon where prize money and sponsorship offer a career if you are able to get the results. I would love to see a lift in the prize purse to take in the top 10 positions in this event to make it more viable for pro athletes to compete and for budding athletes to take time out to dedicate to the race. Maybe with the growth in the sport in New Zealand this could become a reality, which would also create growth in the feeder races?

Regardless of who won or finished on the podium, everyone I talked to during the event thoroughly enjoyed the race and congratulations to all those who achieved their goals. Whether it be a win, a finish or pushing on through adversity – you are all winners and you will take a great deal away from the race and make yourself a better athlete and a stronger person for it. Well done also to all the supporters and support teams behind the racers for without you there couldn’t be a race and the same goes to the volunteers who help the event to run smoothly. 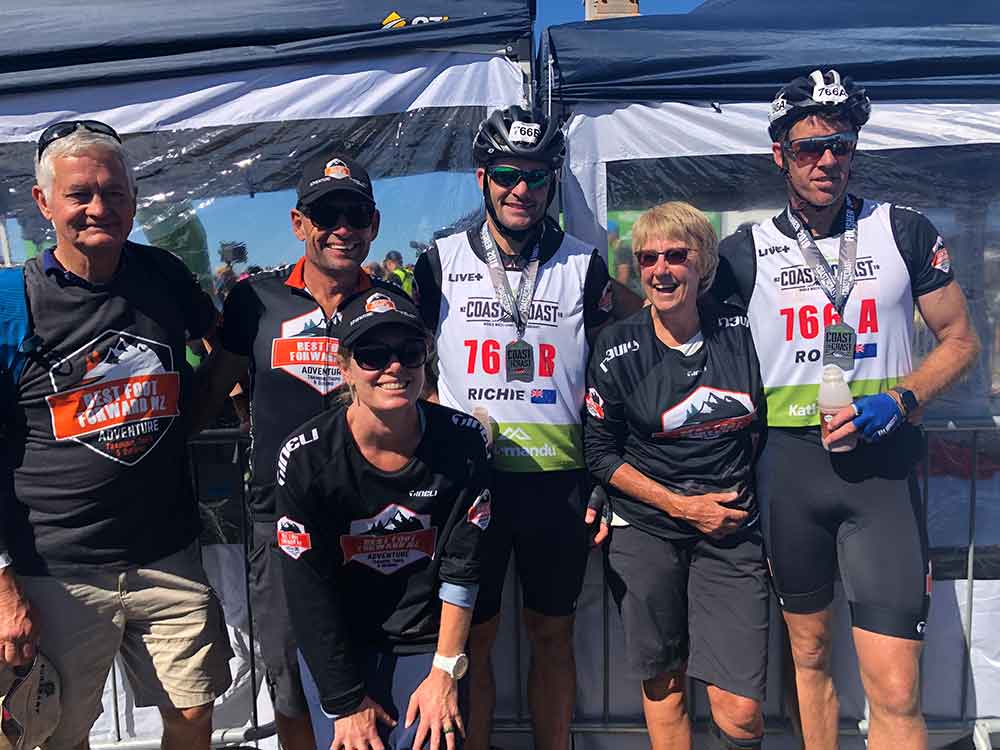 Our Best Foot Forward NZ team support crew included Richie’s dad Don and Rob’s mum Jane. They played an integral part in getting their sons across the Southern Alps and we enjoyed spending time with them over the race.

Starting Best Foot Forward NZ came from my passion for the outdoors, racing and introducing, or helping others along the path to experience the joys of these activities. I want to congratulate all the athletes I have coached and trained over the past year, who achieved their goals in the Coast to Coast and other recent races and look forward to the year ahead as we work together towards other events on the calendar. Thank you for your support.

I like to provide personalised coaching and training programmes based around your goals, family, work commitments and lifestyle. I have enjoyed helping men and women from all around New Zealand to prepare for events like the Godzone, Coast to Coast and Spring Challenge plus various navigation, running, biking and kayaking races.

I am now a Coast to Coast-endorsed Multisport Grade Two kayak instructor and offer pre-course instruction and assessments from my Wanaka base.  Please contact me to book a tuition session or find out when I am running assessments.

For the first time, I will also be partnering with Christchurch-based running coach Flavio Vianna to offer Coast to Coast training camps later this year, to cover all aspects of how to get the best out of your race experience. Keep an eye on our Facebook pages for more details.

Or if you just want to enjoy a customised wilderness trip, without the pressure of doing a race, I can design and guide you on one, around our beautiful southern region.